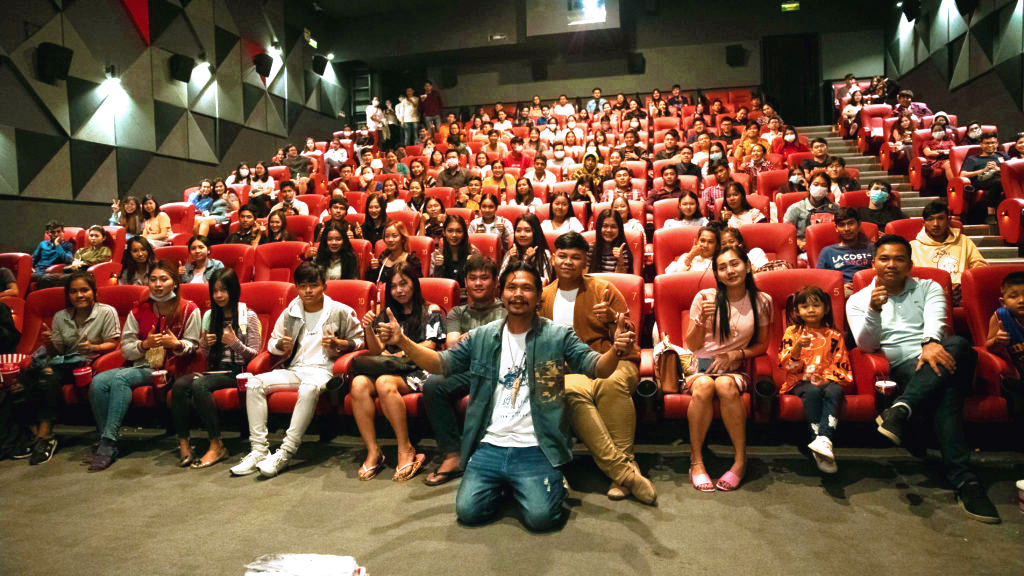 (Fathers) Interaction with fans at the time of screening, 2020

A Cambodian movie theater that was temporarily suspended due to the effects of the new Coronavirus infection. While the movie theater is finally reopening and the returning of audiences, this year too, the Japan Film Festival, sponsored by The Japan Foundation Asia Center, will be held in November, and Japanese movies including the latest work will be on screening. On the other hand, while “horror movies” are popular in Cambodia, ‘Dumbei Kon – Fathers” (In short, “Fathers”), which describes a modern Cambodian family, has appeared before the arrival of Covid19 pandemic, However, it has caught the hearts of the younger generation of spectators. We asked the Director, who is creating a new trend in the Cambodian film industry, about the world of Cambodian film.

First of all, please tell us about the general situation of Cambodian movies.

In the 1950s and 1960s, the late King Sihanouk directed and​ made his royal appearance in the film, which was called the “Golden Age”. However, everything was destroyed during the Pol Pot era. Over 1989, Indian films spread to Cambodia, where films with Indian songs and dancing style were filmed. It was a time when people desired to watch movies, so when a movie was released for a bit of a profit, there was a long line in front of the movie theater, and some people resold the tickets. However, the movie world once again declined and was revived around the year 2000. At that time, Indian movies and horror movies were the mainstream. The movies such as “K’maoj Dum Chek Chvia (Ghost of the Banana Tree)” and “P’teah Kumaoj Tinh (House bought by ghost)” were my masterpieces at that time. However, the rise of television has caused the​​ movie world to decline again. I, myself, had to switch to TV industry. Around 2012, I felt that the movie industry would be revived, stabilized and it would not decline again, and so I returned to this world. I think that the Cambodian film industry will become more and more exciting in the future, especially in the next four or five years, it will catch up with the international level.

At first, Mr. Director, you focused on horror films, but you have recently gained popularity for his work “Fathers”, which deals with social issues such as poverty and social division. Please tell us about your work.

The achievements from 2012 such as “Vikaljarek (a work describes a mentally ill patient)” and “Thmob (a ghost story called Thmob)” have become big hits. I was mainly producing horror movies, but recently I have heard people say “Is there a different genre of movies in Cambodia?”. So, I tried the human story “Fathers” for the first time. The screening started around January this year, and the Covid19 pandemic has happened when the “Fathers” was about to be a big hit.

Through this movie, I played portraying myself as a father making an effort for his children. Many films and literary works focus on the love of the mother, and rarely express the feelings of the father. However, my father and mother have the same love for me. The mother interacts with her children in many words, but I wanted to express that father quietly gives his life for his child. The work was invented by me and written with my colleagues. I listened to the story of the cyclo driver near the actual Ounalom Pagoda and pieced everything together into a story. I, myself, always wanted to draw something new, so I chose the cyclo driver to put a spot on something that had never been seen before.

Mr. Director, you also recruited actors and created movie scenarios. How did you get involved playing in the film?

After graduating from my hometown high school in 1998, I started to perform traditional martial arts and played a role in a theater company. My teacher was a professor at the Royal University of Fine Arts, and with his strong recommendation, I entered the Royal University of Fine Arts in the year 2000. However, I thought that the actor business had a long life span, and I became more motivated to direct a movie. I met a Secretary of the Ministry of Information, Mao Ayut, and under his guidance, I shot movies such as “Neang Poun” and “Sanya (Promise)”. As I devoted myself to the movie, the idea of “dedicate my life to the movie” has grown.

After that, I made “P’teah Kumaoj Tinh” and “Kumaoj Dum Chek Chvia”. It was so popular that it was dubbed in Thai language in Thailand. After that, I made 4​ to 5 films, but around 2005, the rise of television began to weaken the movie world. I also joined Bayon TV and left the world of movies behind. The movie came back around 2012, so I decided to move into filmmaking again.

Please tell us about the shooting of this episode. Also, can I watch the your work in Japan with English and Japanese subtitles?

I’m starring myself in this movie, but you might wonder why I am even an actor. When I was filming a movie about the mentally ill patient, I was watching a mental patient at the refugee camp “Site 2” on the Cambodia-Thai border when I was a child, and there was no other suitable person for that role, and the lack of actors due to the cost of hiring them, so I came to the conclusion that I should play this role myself. In another movie, there was a scene where I was in prison and lost 10 kilos of my body weight. At the time of “Tmob” , I was eating raw beef, I did everything to get into the character. In the “Fathers”, I spent about two weeks tanning my skin and prepare for the role, while learning the life of a cyclo driver and how to drive.

The “Fathers” can be viewed with English subtitles. Unfortunately, there are no Japanese subtitles yet. After a while, I’m planning to upload it to the movie distribution site, so I would like everyone in Japan to watch it. (Details will be described later) 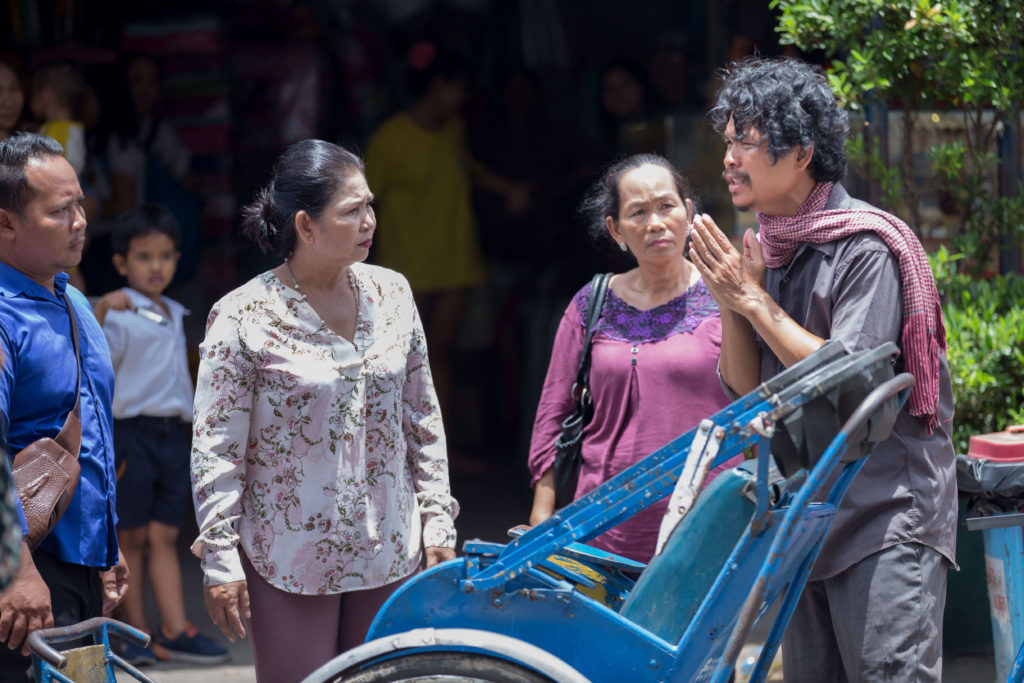 From the “Fathers” movie

What kind of activities do you plan to do in the future?

I think I​ will postpone making a horror movie for a while. I have a scenario, but I feel that my fans do not really want this genre. I am thinking about human stories, action, science fiction movies, and so on. Actually, I have a big project, but I do not know if it will be released because it costs more than $100,000.

What films, literature and art have you been inspired by?

A Cambodian movie, called “Puthisen Neang Kangri”, directed by Ly Bunyim, was an inspiration. This movie was from the golden age, and it as so much inspired that Chinese filmmakers came to Cambodia to study. I have loved the movie since I was little. When I was at the refugee camp, people gathered to watch a movie with a TV set rather than play a movie in the theater, but I was taught to have beautiful hand writing and wrote on signboard in various theaters on the streets. In exchange, I watched movie for free. I also have seen various films from Hong Kong, China, India, and so on.

How much does it cost to make a movie?

Horror movies were the mainstream because the cost of shooting was low. Is the production cost of one movie about $50,000? Actually, I would like to challenge various genres such as action movies like in other countries, but after all the big problem is money. In my heart, I would like to do a movie production activity someday like during the “Golden Age”. I also want to make a movie about history. I am thinking of filming Jayavarman VII in 2025, which costs $7 million. There are also technical issues, so I am looking at the timing.

The production costs rely primarily on money from sponsors. I have been making movies since around 2000, but I did not care about money and saved money. If the movie hits, you will earn some money. But it is not very profitable. It is a job that I can continue because I really like it. However, I believe that in the future it will spread to markets other than Cambodia, so that I can earn income properly, and continue to make new works. 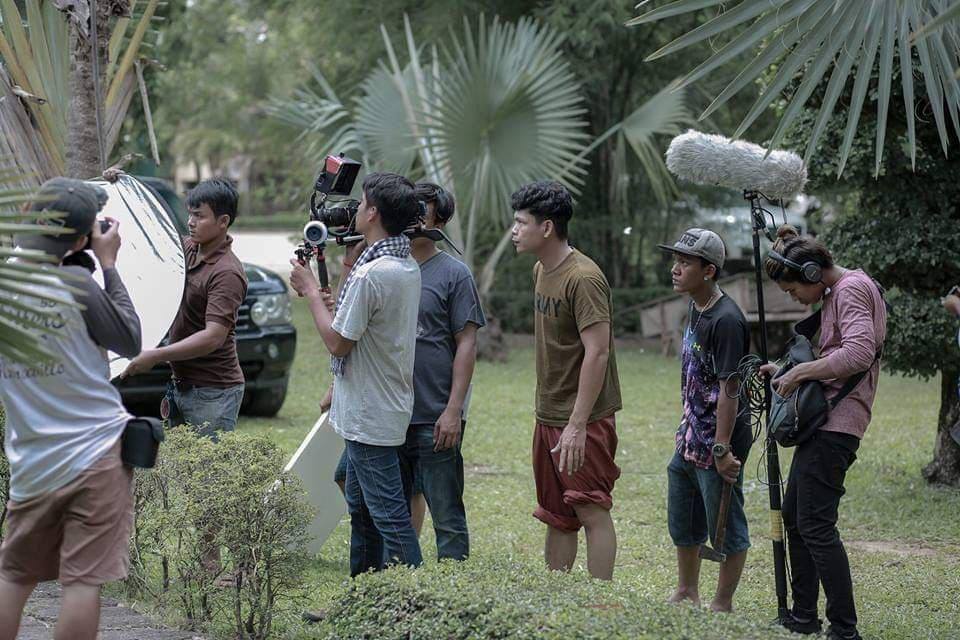 As for markets other than Cambodia, are you thinking of expanding your work overseas?

Yes, the target is Japan, Korea, China, and India. America has a big market, so I will do it later.

We hope that we will be able to expand into various parts of the world in the future. It would be nice to be able to exchange film fields between Cambodia and Japan.

I agree. I have been to Hong Kong film festivals before, and I have been to China and Malaysia many times. I also have had experience interacting with local directors at workshops in Brunei. My film was also shown in the Surin region of Thailand and Laos, and in France, I introduced “Thmob”. It was also screened at the Cambodia Festival at Long Beach, California. Every time I go to each place, I get various interviews, exchange opinions on production, and discuss ideas for collaborative production. I would like to interact with some directors in Japan.

What are your favorite Japanese movies, Japanese culture, art, and your impressions of Japan?

In the movie I saw before, there was a zombie movie (movie “Don’t stop the camera!”). I am very interested in Japan and I wanted to go this year. However, I am sorry that I cannot go because of the Coronavirus pandemic. Japan has an ancient culture and traditions, and I think it should be emulated as a member of Asia in terms of performing arts and traditions. I also respect the good behavior of Japanese people.

Finally, please give a few words to Japanese readers.

I would like everyone in Japan to see the “Fathers”. “Thmob” is also a historical film that depicts Cambodian traditions, so you can learn about Cambodia culture. I also want to deliver my work to Cambodians who are waiting for my movie in Japan.

You can see “Vikaljarek”, “Thmob”, and “Tiaron Nakam Kumaoj (Ghost torture)” on Soyo and Iflix (English subtitles). Stay tune for the “Fathers” as it is coming up in October. 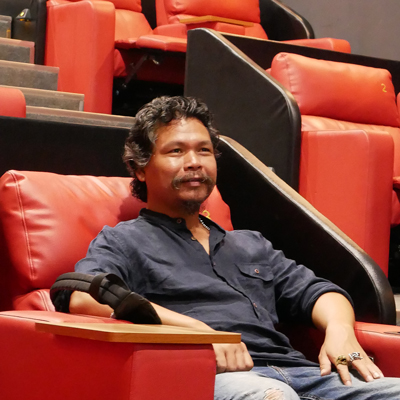 Born in 1979, he spent time at a refugee camp on the Cambodia-Thai border of Banteay Meanchey. After he failed his studies, he became interested in the stage as an actor and studied video production at the Royal University of the Fine Arts. After graduating, he started his own production company and started making movies. He directed a horror film about the ghost of a banana tree, the Khmer Rouge revived in modern times, and the mentally ill, which is known to all Cambodians.

Click here to find out more about the Director!
https://en.wikipedia.org/wiki/Huy_Yaleng (Wikipedia)

The Japanese language edition is in following link of “Nyonyum magazine”